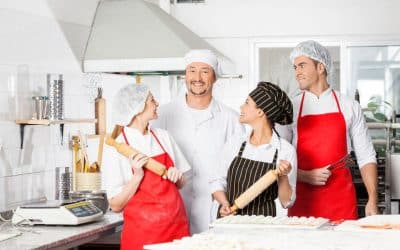 Extending the $20,000 asset tax write-off scheme to $30,000 is once again is another win for small business tax deductions. The Australian federal government’s recently announced 2019 budget on 2 April. Which continues the favorable environment for over three million Australian small business owners needing that helping hand to grow and prosper.  END_OF_DOCUMENT_TOKEN_TO_BE_REPLACED Invest in Australia as a nation that is at the forefront of research and development, education, business and innovation. Our natural resources are limitless which provide vital energy supplies to the world. Medical and technical advancements abound resulting in a high quality of life. This article is designed as a quick introduction to the Business Innovation and Investment  VISA 188 (Subclass) applicants exploring how to invest in Australia.

Why Invest and do Business in Australia?

Australia ranks in the top 5 countries to immigrate and the nation was built on colonial settlement from 1788 with the arrival of the First Fleet of British ships to Sydney, New South Wales. Since then Australia has developed into second and third generation immigrants who have found a home in Australia.

How to Invest in Australia?

Advantages of Investing in Australia

Australia’s is rated the 9th highest in the world, according to the 2017 Social Progress Index. Sydney ranks 10th globally. Melbourne 16th and Perth comes in at 22nd according to the Mercer 2017 Quality of Living Rankings.

Almost 279,000 businesses across sectors such as accommodation, cafes, restaurants and takeaway food services, retail and transport. According to the latest statistics available (as at 30 June 2016). The industry employes around 890,000 people and the total Australian workforce for 2016-17, consequently increasing from 4% to around 924,600. Australia experienced record inbound tourism in 2016-2017 driven by strong growth from China, Malaysia, Hong Kong

The financial, regulatory, legal, political and economic systems are well established and provide security to Investor Stream applicants looking to invest in Australia

Australia’s (baby boomer) population is fueling the development sector in aged care and health services. Baby boomers are typically healthier and wealthier than their parents, thereby living longer and re-defining the housing market

Internal and external immigration stimulates the housing and building economy.  Therefore, immigration has an enormous role to play in the Australian property market. About 55% of our massive population growth is made up of migrants from overseas

Spend by governments and private partnerships benefit growth planned around Australia. For example, Nowra and Western Sydney north rail link in NSW. The rail upgrade and duplication in Victoria. The Bruce highway and Beerburrum rail, and Cunningham Highway upgrades in QLD to name a few

Australia’s easy access via sea and air is a major factor for import and export services especially, in the Asian region. Hence, two-way trade in 2016 was A$673 billion, which made up 40% of our GDP. Nine of Australia’s 12 largest markets have a total trade of A$373 billion are within the Asian region

Visa applicants working with their respective migration agents and seeking nomination by an Australian State or Territory government must lodge an Expression of Interest (EOI) through the SkillSelect system. This article ‘Invest in Australia‘ is written as a guide for those applicants considering migrating to Australia through the ‘Business Innovation and Investment Visa 188 (subclass) Invest in Australia FIRB approval for 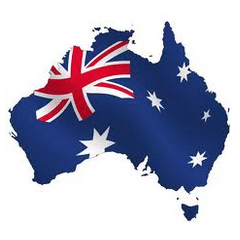 The Australian Government expects all entities seeking to invest in Australia to maintain the highest standards of corporate behaviour. Irrespective of whether those entities are Australian or foreign owned. Persons wanting to invest in Australia or involved in operating these entities are expected to understand Australia’s regulatory environment and abide by all the relevant requirements. Foreign investors should be aware of their obligations outlined in the link below. These requirements are ongoing and may change from time to time. Accordingly, investors are expected to keep themselves up to date with the FIRB and changes to their obligations that may occur.

Why Invest in Australia?

The economy has outperformed other countries for more than two decades, as a result is achieving great success in global markets. The full report can be found here ‘Why Australia’ BENCHMARK REPORT 2018 from the Australian Trade and Investment Commission (Austrade)

The Australian economy is forecast to be the 13th largest in the world and the fifth largest in the Asian region in 2018, despite the fact the country is home to only 0.3 per cent of the world’s population. Australia’s nominal GDP is estimated at US$1.5 trillion (A$1.9 trillion) resulting in 1.8 per cent of the global economy. Australia has almost tripled the value of its total production from two decades ago 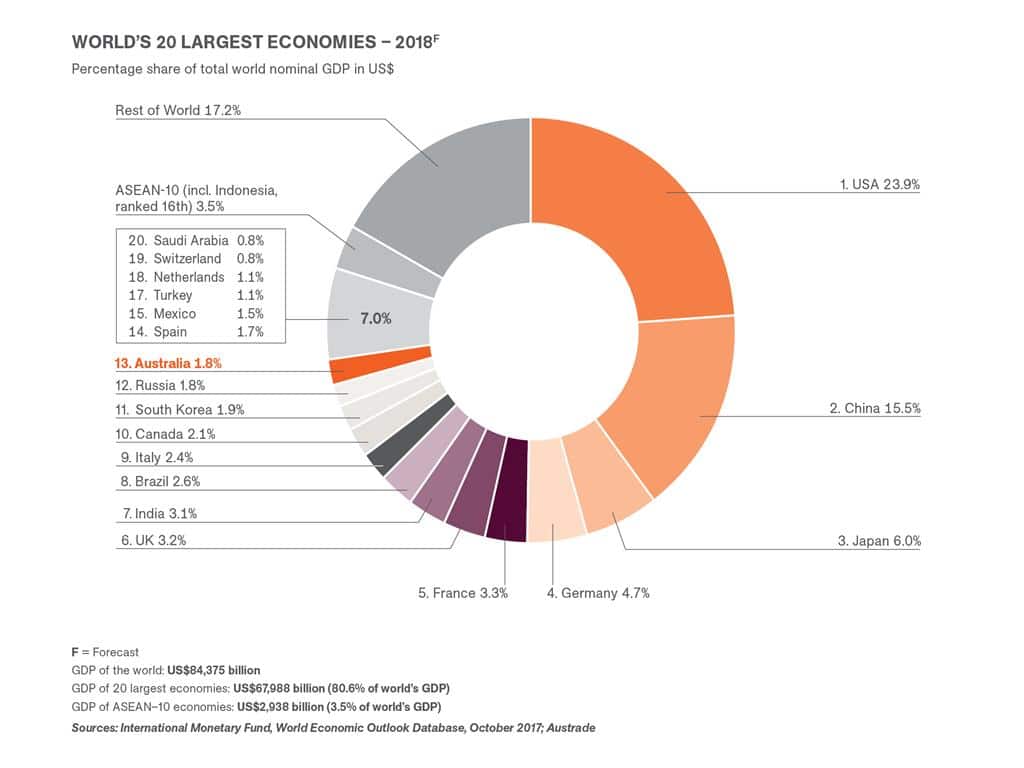 The country is a leading provider of goods and services that are in high demand across the global economy. Australia is a major producer of natural resources, including significant liquefied natural gas reserves. Clean, green agricultural commodities and premium food are coming into production. Operates in sophisticated financial markets, including the world’s sixth largest pool of managed fund assets, and a  noteworthy leading destination for education and tourism 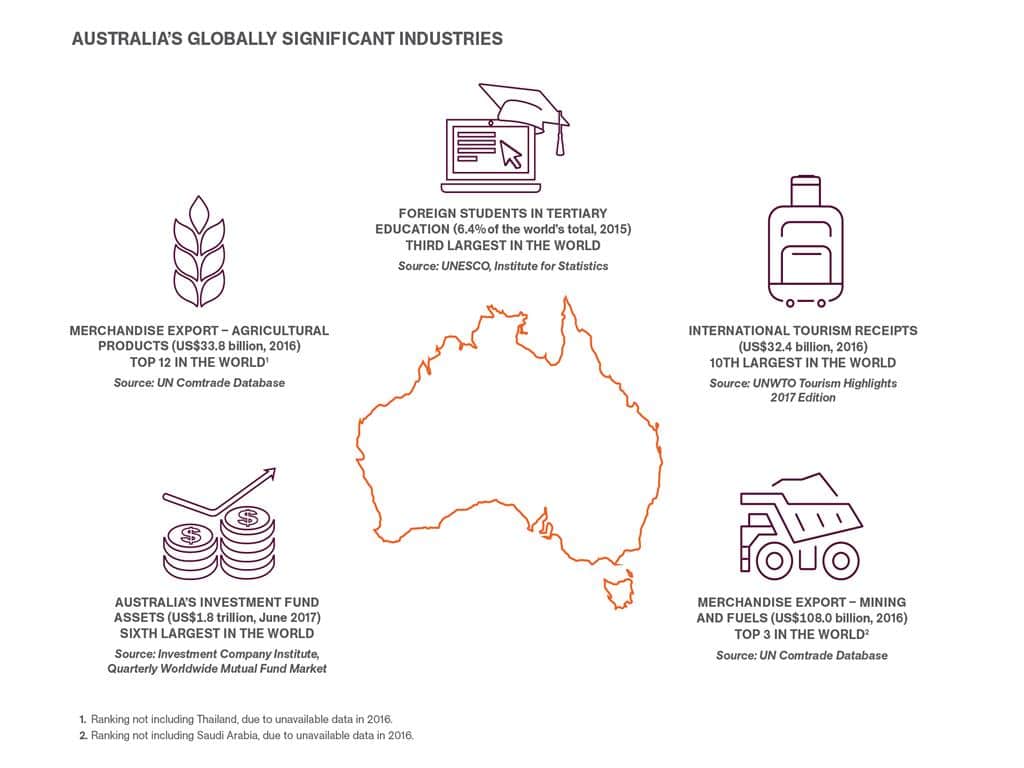 Australia is an ingenious nation that invented the black box, penicillin for civilian use, high-speed WIFI, the cervical cancer vaccine and Google Maps, among other innovations. Invest in Australia entrepreneurship funds and programs on the rise. One of 9 OECD countries that recorded an increase in the number of new businesses between 2013 and 2017. Almost half of all Australian firms are innovation-active, laying the groundwork for future discoveries 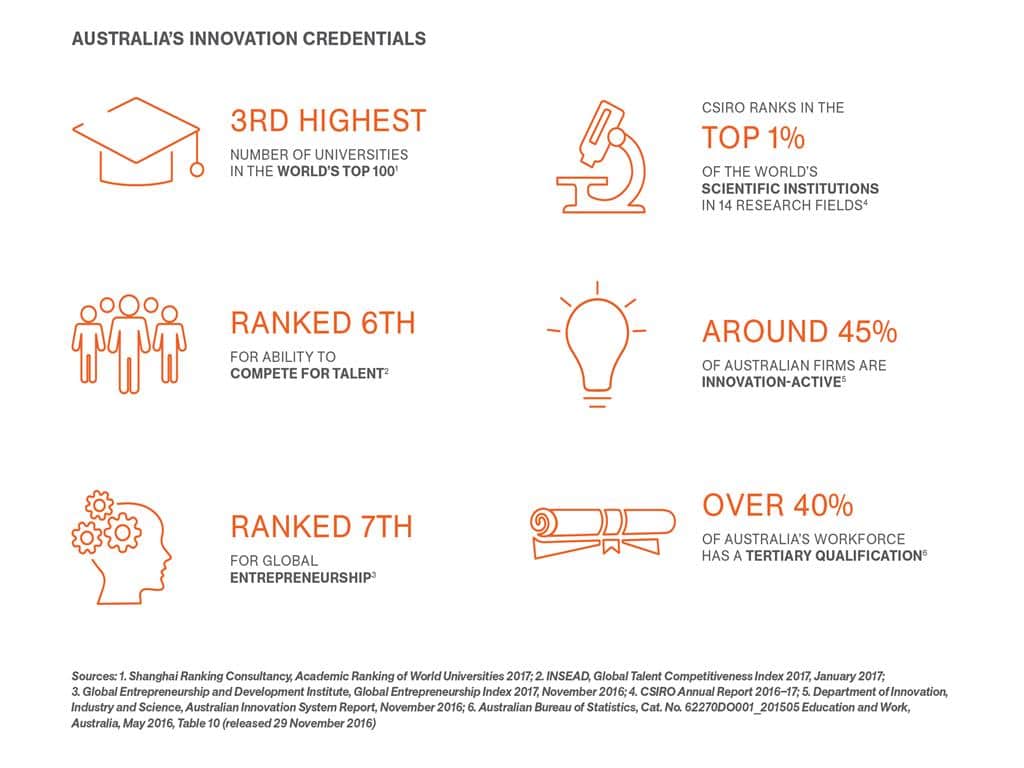 The dynamic Asian region integration is driving wealth creation and overall economic growth. Of the top 12 export markets in 2016, ten were in the Asian region and all were rated above investment-grade. Their combined value was around A$227 billion, making up more than two-thirds of Australia’s total goods and services export earnings of A$330 billion in 2016 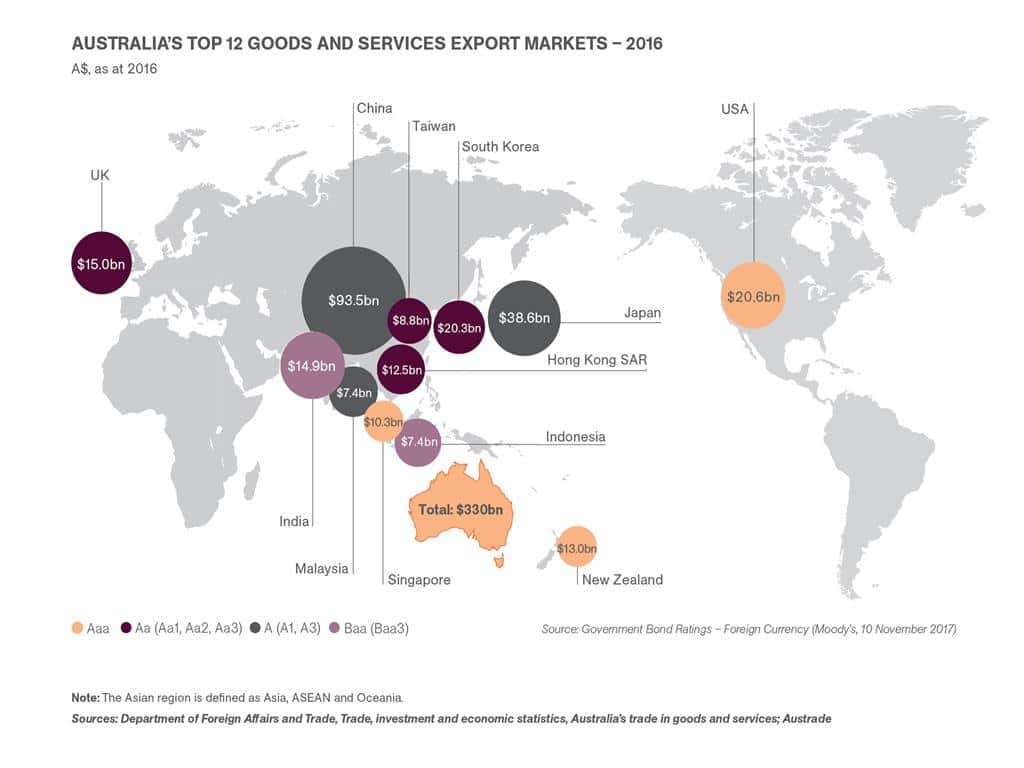 The country is one of the easiest places in the world to do business, ranking 14th out of 190 economies. It takes around 2.5 days and a minimum of three procedures to start a business. Australia also ranks particularly well for enforcing contracts (3rd globally), getting credit (6th) and dealing with construction permits (6th). The share of foreign buyers in Australian housing markets however continued to fall in Q4, dropping to a 6 year low 8.4% in new property markets and a 5-year low 5.5% in the established housing market.

Foreign direct investment (FDI) inflows to Australia, which more than doubled in 2016, maintained their high level at US$46 billion in 2017.

According to the United Nations Conference on Trade and Development’s (UNCTAD) World Investment Report 2018, Australia remained in the top ten global destinations for FDI.

From 2011 to 2017, Australia attracted an annual average of US$47 billion in FDI inflows, compared with an average of US$28 billion over the previous term (2004 to 2010). This represents a growth rate of 70% over the two periods, well above the world average of 24% and developed economies of 12%.

This solid growth has raised Australia’s share of global FDI inflows to 3% in the period of 2011–17 from 2.2% in the previous period. Australia’s economic resilience, strategic business location, increased global trade and investment ties, sound governance and political stability continue to position Australia as an attractive investment destination.

Accrutus Capital has provided this quick summary of important information to help your decision when investing and setting up a business in Australia. More detailed information can be found on these Australian Government portals

The disclaimer covers content, comments, responsibility, links, government and local laws, jurisdiction and communication methods. None of the contents on this website or blog should be construed as any kind of advice or recommendation. Nothing in it should be taken to constitute a statement that is intended to influence a person or persons in making a decision regarding any investment or financial product. This website or blog does not purport to be complete, accurate or contain all information which its users may require to make an informed assessment of whether to invest in any Offer listed through Accrutus Capital Pty Ltd. Alternative investment offers smart investors an alternative diversifying strategy for both shares and fixed income across various asset classes. When selecting the right mix in your portfolio it is crucial to consider your time to retirement, tolerance for risk, and expected investment returns, investing across borders can also broaden your investment options, however be cautious.

END_OF_DOCUMENT_TOKEN_TO_BE_REPLACED 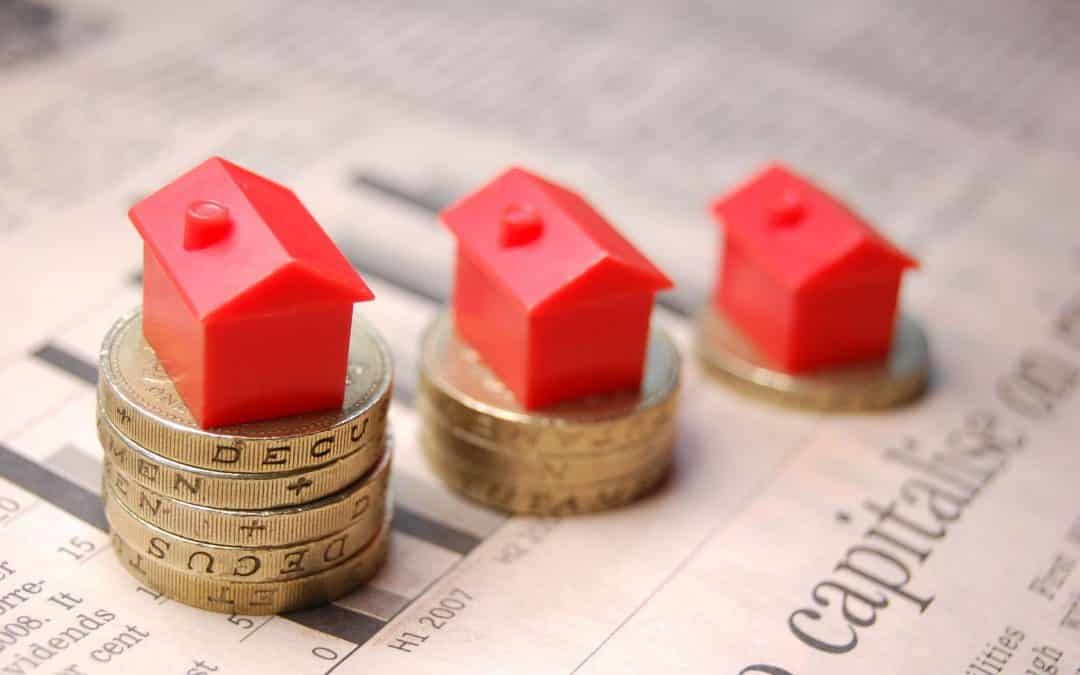 ResiBonds property development for small, medium and large-scale, real estate projects such as high-rise, land acquisition and sub-division and townhouse developments in major Australian locations from Brisbane to Perth. Issued by the developer, builder or renovator. For investors ResiBonds property generally deliver higher returns of around 10% ++ per annum or more compared to the low returns investors are getting from bank term deposits. These are short-term investments of between 12 to 36 months. END_OF_DOCUMENT_TOKEN_TO_BE_REPLACED 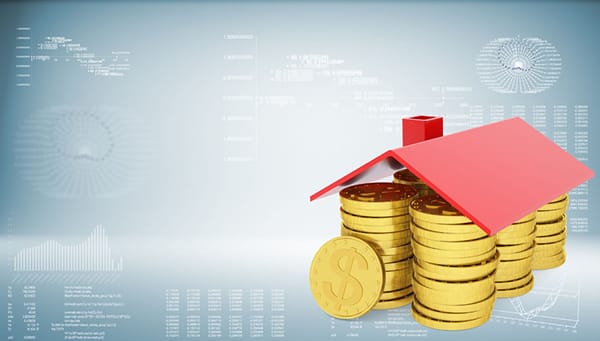 A new trend for self-managed-super-funds (SMSF) in Australia to grow their portfolio is through alternative capital investments. The baby boomer generation is rapidly reaching retirement age. Hence, there is widespread realization that your SUPER savings will not be sufficient to provide a decent standard of living. As a result, the SMSF industry has seen massive growth over the last 10 years.

Sophisticated investors are seeking SMSF diversify portfolio options rather then keeping large amounts of cash in the bank. Furthermore profiting the banks and not your SUPER account. Because deposit rates are at historical lows, usually turn to property as a safe asset class. END_OF_DOCUMENT_TOKEN_TO_BE_REPLACED